What follows below is an explanation of the seven basic principles of Mindful Design. We start with Curiosity, for that is where we begin – by asking questions. No design process ever started without asking questions. The point being, you don’t have to be a designer. But if you are one, you’d better be mindful.

“The important thing is not to stop questioning.  Curiosity has its own reason for existing.”
Albert Einstein

This is what Ruby Wax says about Curiosity:

“Curiosity… is what makes us superior. Sadly many people don’t use it. They have it, but it has become obsolete.
“To me, the most important and beneficial of all exercises is the strengthening of your curiosity because that is the glue that binds the human race. If you are curious about someone else, and show it, it is the most flattering thing you can do for them; they will give you anything; the keys to their car, their business, they’ll probably even marry you. I have a friend who decides in minutes if she wants to go on a date with someone by timing how long it takes him to say ‘you’ rather than ‘I’. Most people don’t ask questions and some of the most brilliant people I know (with IQs off the planet) have no curiosity and are therefore idiots.
“There should be training simply to learn how to be curious rather than endless MBA programs. People are what sells, nothing else. You like and trust the person, you’ll do business with them and if you are genuinely curious, people won’t be able to resist you. If you learn to speak and listen mindfully, stepping out of your habitual patterns of behaviour, you will reduce interpersonal conflicts, stereotyping and cross-cultural misunderstanding.”
(Wax, Ruby. Sane New World: Taming the Mind, Kindle locations 2566-2569, Hodder & Stoughton Kindle Edition)

“Creativity is allowing yourself to make mistakes.  Art is knowing which ones to keep.”
Scott Adams, cartoonist and inventor of ‘Dilbert’

Creativity is now, of course, the golden ticket for almost any corporate or business enterprise. People with jobs where creativity has never been part of the mix are all of a sudden being told that this is what matters. Creative thinking is better than ordinary thinking (isn’t all thinking creative?), and every task is creative if you look at it in the right way. Trouble is, many – most – people don’t think of themselves as creative. Only the ‘creatives’, which sets them as a breed apart. Design is a creative process, there’s no doubt of that, and if as a designer you have ideas and have had the right training you won’t browbeat yourself looking for your creative urges. The real point about the power of creativity is that it extends into all areas of life and grows from within all sorts of people. Recognising this is the first step, and is primarily a matter of how you see yourself. How you create yourself, if you like. Or your Self. That new Self that is going to contribute to the New World, right?
Thinking is creative. You create thoughts. But – wait. They also create you. And from thoughts come feelings, and from feelings come thoughts, and from both come actions – which create you. If you think, and if you feel – if you’re not dead, in other words – then you are creative. Nothing more important to create than your Self.
Here is a diverting list I found at layerform.com of 40 ways to stay creative. A couple of our Mindful Design principles appear, you may (or may not) be surprised to see. There are many more; but on the other hand, you only really need one. Start controlling your thoughts, make them go where you want them to go rather than them taking you whereever (more on this elsewhere on the site. It’s like meditation, but don’t run a mile already). That’s the key to creativity. 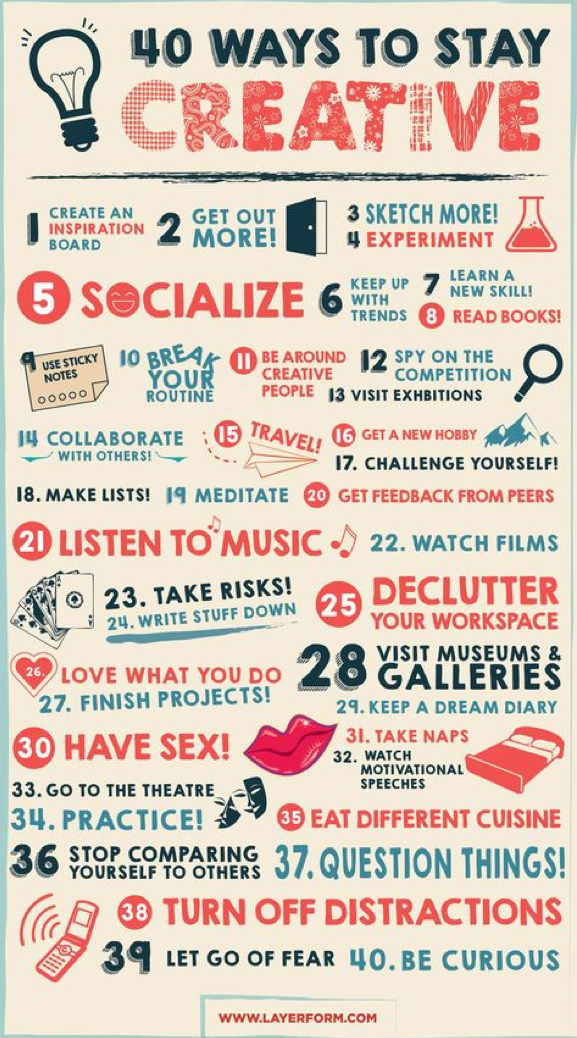